You are here: Home / Memorials / Nugget 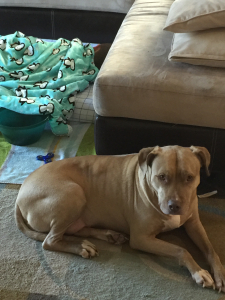 When we adopted Nugget in 2013, he literally destroyed our house by eating door frames, blinds & his plastic kennel due to his anxiety. We actually drove him back to the shelter to be surrendered. But, instead found ourselves at the vet office where he was put on Prozac. Over the years he has destroyed many crates & rugs and had many explosives (💩) panic attacks during storms and fireworks. But he is the sweetest and he grew to love us as we did him, he even has a special bond with one of our bunnies! Nugget definitely was a handful but he was such a blessing to our family. I hope that he found eternal peace as he crossed the rainbow bridge. We will forever be grateful for the 8 years we had with him.