You are here: Home / Memorials / Ace 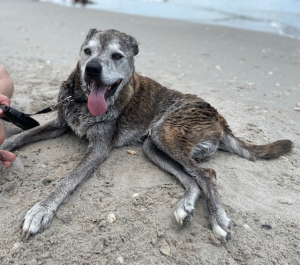 Ace Edward (E.) "Poose" was a dog with a heart of gold and ears that were entirely too small for his head. Adopted by my husband and I in 2007 (our first adoption together in our relationship) at the age of 4 months, we were his third owners in his short life. We quickly realized why! After going through two types of mange, giardia, 17 remote controllers, all of our windowsills and baseboards, XBox controllers and anything else he could get his jaws on, we almost called it quits on this hell on wheels puppy when he swallowed a rope toy that cost us (as a very young couple) a $1,400 surgery. We knew in our hearts that if we didn't quit on him, he would never quit on us. Ace NEVER quit on us. His love was unending and his protection of our family and our son was ever present. A pit bull mix, we often felt he was misunderstood. People used to cross to the opposite side of the street when we walked him. If only they knew that this dog was scared of his own reflection and balloons, he wouldn't hurt a fly (except inanimate objects he wanted to chew on). A true reminder to never judge a book by its cover. During one of my college courses I entered a public speaking competition with a topic surrounding pit bulls, the breed, and the misconceptions. My husband and I snuck Ace onto my college campus and covered him with a jacket in the elevator on the way to my classroom. He was SO happy to be with us, his wagging tail poked out from under the jacket thumping against the wall and gave us away! Luckily, the professor in the elevator with us allowed us to pass and Ace changed people's hearts that day as I spoke about him and his breed. He was magnetic, with golden eyes and a beautiful soul that always drew people and other animals to him. Our cats used to play fight with him as a puppy regularly and he was always so careful to not bite down on them while he played. Even if he had their whole head in his mouth! He was known to check on each member of the family emphatically if we went anywhere near water, especially so once our son was born. A certified "Big Bruiser", Ace would often lack an awareness for his surroundings and step on people's feet or toes and smack his thick head against the coffee table with his Eeyore-like personality. He was incredibly silly in that way. Ace was a long goodbye. As his body began to fail him more and more, his mind then followed, and we knew we would have to make the hardest decision there is. If love could have saved him, he would have lived forever. Ace taught us so many lessons: patience, perseverance, steadfast love, to never judge a book by its cover, to fight for the misunderstood and the underdogs, and towards the end, to never trust a fart. Our love and appreciation for Ace and all that he gave our family will live on forever in our memories and he will ALWAYS be in our hearts. We love you sweet boy! Mommy, Daddy, Emmett, Gator and Korby P.S. - We know Tyson is so very happy to have you with him!